Arkansas’ Delta Byways region is home to outstanding Southern flavors, from catfish to tamales to award-winning barbecue. Plus, the state’s fertile farmlands are home to soybeans, rice and more. Here’s a quick look at some of the best tastes to seek out in your trip through the Natural State. Barbecue. You might not expect to find a James Beard award-winning restaurant in the Arkansas Delta, but a visit to Jones’ Bar-B-Q Diner in Marianna will show you what the fuss is all about. The Jones family has been serving locals—and since their Beard Award win, people from all over the world—for more than 100 years. Stop by this nondescript diner for some great food and a true taste of the South.

Tamales. Like its neighbor Mississippi to the east, Arkansas celebrates the mixing of many cultures in its cuisine. Take the tamale, which can be found at restaurants big and small throughout the Delta. A blink-and-you’ll-miss it spot to check out in Lake Village is Rhoda’s Famous Hot Tamales, which is famous for its coffee can-packed tamales (a dozen in each that you can take home).

Delta Cultural Center. Learn about the history and heritage of the Arkansas Delta at this unique museum in Helena. Explore exhibits that examine the history of the area, starting with early settlements on rich croplands. Speaking of food, the Delta Cultural Center has been the home of the King Biscuit Radio Show—the longest-running daily blues radio show in the United States—since 1990. Stop by from 12:15 to 12:45pm Monday through Friday to listen to “Sunshine” Sonny Payne broadcast live.

Lake Chicot State Park. Want to catch your own meal? Lake Chicot is an angling haven, whether you’re going after catfish or crappie and bass.

(Photos courtesy of Arkansas Department of Parks and Tourism)

Blues country awaits you in the heart of the Mississippi...
Learn more

August is Family Fun Month, so hop in the car,...
Learn more

Thank you for your interest in the Great River Road...
Learn more

Savor the flavors of the South when you explore the...
Learn more

Fall is a great time to explore the Great...
Learn more

It’s easy to find fun ways to get in the...
Learn more

Save room for dessert—here are some of the most iconic...
Learn more

Arkansas is rich in history and there’s no better way...
Learn more 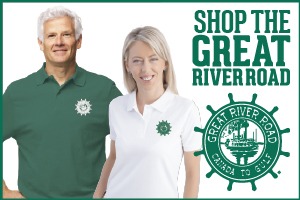